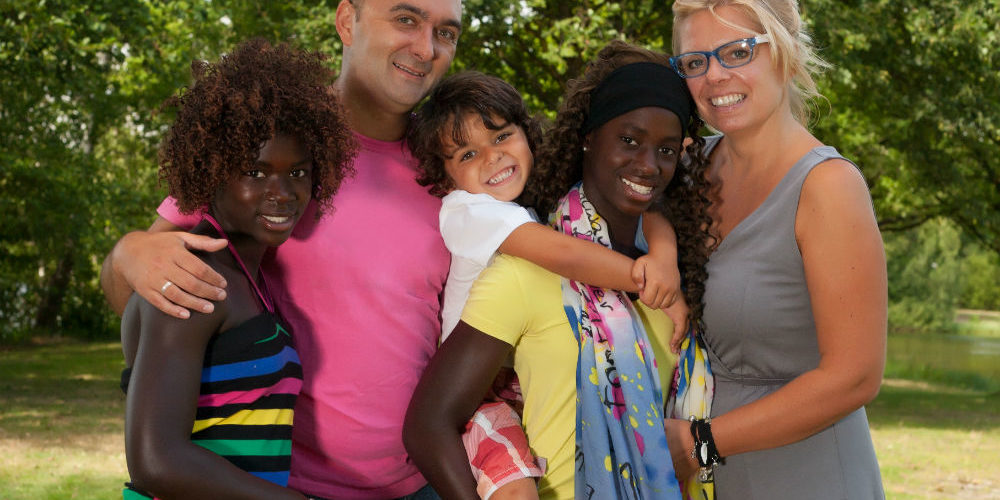 The joys of adopting a child of a different race than you are innumerable. But with transracial adoption come some realities that potential parents must be prepared for. It’s not a question of if they will deal with these situations—it’s when. Here are some of the realities (both bitter and sweet) of transracial adoption.

Reality #1: There is no such thing as “color blindness.”

If you are proclaiming as a potential or new parent that you are “color blind” and that “skin color doesn’t matter,” please examine what you are saying—and stop saying it. Stop believing it. If you cannot do that, then do not adopt a child of a different race.

Your belief that skin color is not a “thing” only contributes to the problem of race relations and stereotyping in this world. You can’t deny what is sadly omnipresent in our society—you must face it, fiercely and with coping mechanisms at the ready. Now is not the time to bury your head in the sand and proclaim that “skin color doesn’t matter.” As much as we’d like to believe that it doesn’t, the reality is much different.

For example, in a 2015 blog post for Today’s Parent, author Jackie Gillard (Caucasian woman and mom of daughter Nyah, adopted from South Africa), had this to say:

“We live in a diverse community, and perhaps I was a little naive, but I didn’t imagine the color of her skin would be such an issue. We knew before her adoption that a black child in a white family would invite questions and opinions, which we thought we’d be able to answer with educated, sensitive responses. We accept being an example for the evolving definition of ‘family’ but didn’t anticipate that we (and Nyah) would feel such resentment toward all the scrutiny. She has been called ‘poop’ by some kids in her class and has been told by others that her skin color is the reason she’s left out of playgroups. I feel guilty that she has to deal with any of this; I simply wanted to be a mother. Nyah has told me a few times that she wishes she ‘matched’ her family and has even asked me if I wish I’d made a white baby in my tummy instead of adopting her. We assure her often that we love her because of her beautiful skin, not in spite of it. How can I explain that I only wish I had conceived and given birth to her?”

Robyn Wells (mom of an adopted son from Ethiopia) explained to writer Karen Valby in an adoption article for Time Parents that she was prepared for many realities of transracial adoption but “at no point in the process of considering transracial adoption did I think I would have to teach my son how to stay alive.”

Reality #2: With the adoption of your child comes a new culture that your family gets to be part of.

Get ready for your world to become bigger, because as a transracial adoptive family, you get to dive into a whole other culture that your family is now directly connected to, thanks to your child. The benefits of this cannot be overstated. For example, when my husband and I adopted our son from South Korea, we were overwhelmed by the acceptance we felt as part of the South Korean culture. We joined an adoptive parents playgroup that consisted of other couples who had adopted children from South Korea through our agency. We have attended Korean holiday celebrations, met many families from South Korea, went to a Korean Culture Camp run by Korean Americans for families with adopted children from South Korea, and the list goes on. We now consider South Korea to be part of our family’s culture. Had we not adopted our son, this huge and important piece of our life would have never existed. Katie, adoption blogger at Loving Well Living Well and white mom of an adopted black daughter, says it best in her blog post “10 Truths and Realities of Transracial Adoption,” reminding parents to not only embrace their child’s culture but to face the difficulties and challenges of being a transracial family head-on:

“To have an additional layer of heritage, culture, and race imprinted in your family’s makeup creates a life that is richer, deeper, and fuller. To embrace a community, a way of life, and a culture that may differ than the one you were born into opens your eyes to a beauty which may not have been exposed without having a family member born from that community. That honor comes with a distinct obligation a parent must face square on to ensure a successful transracial adoption experience. Unfortunately, this responsibility can be unintentionally neglected and has led to damaging effects on a child’s identity, understanding, and coping mechanisms which continue throughout their life.”

For Katie’s recommendations on how parents can equip their children (and themselves) to deal with racism and stereotypes, read her full blog post here.

Reality #3: You are not “saving” your child. Don’t adopt simply because you want to be some sort of hero.

Please do not let the concept of “saving a poor, innocent child” be the reason that you adopt a child—any child, let alone a child of another race. Karen Valby, a mom and writer who lives in Austin, Texas with her husband (both of them are white) and two daughters, one Ethiopian and one African American, says this about Jane Jeong Trenka’s memoir, The Language of Blood, in which Trenka discusses the “imposition of forced gratitude”:

“Neighbors in her all white conservative Minnesota town loved to remind her how very lucky she and her sister were that their German Lutheran parents rescued them from Korea. Her parents called her ‘chosen,’ a verbal tic that made the author feel like a sale item from a department store. Any questions or fantasies about her birth mother seemed like a betrayal of their gift of family. How can one build an authentic relationship of love and trust with a person to whom you’ve been made to feel you owe an unpayable debt?”

—From Valby’s article in Time Magazine Parents, titled “The Realities of Raising a Kid of a Different Race”

Are you ready to pursue adoption? Visit Adoption.org or call 1-800-ADOPT-98 to connect with compassionate, nonjudgmental adoption specialists who can help you get started on the journey of a lifetime.

What are other people reading?

Kathleen Kelly Halverson lives in Olney, Maryland. She and her husband Jeff have one son, Matthew Seong-jin, whom they adopted from South Korea in 2009. Kathleen works as an editor/writer/social media specialist for a nonprofit in Rockville, MD. An avid reader and passionate advocate for animals (especially senior dogs), Kathleen enjoys spending time with her family and their two dogs, beagle brothers Jupiter (11) and Tyson (7). Out of all her roles in life, being Matthew's mom is the one that brings Kathleen the most joy.

This website uses cookies to improve your experience while you navigate through the website. Out of these cookies, the cookies that are categorized as necessary are stored on your browser as they are essential for the working of basic functionalities of the website. We also use third-party cookies that help us analyze and understand how you use this website. These cookies will be stored in your browser only with your consent. You also have the option to opt-out of these cookies. But opting out of some of these cookies may have an effect on your browsing experience.
Necessary Always Enabled
Necessary cookies are absolutely essential for the website to function properly. This category only includes cookies that ensures basic functionalities and security features of the website. These cookies do not store any personal information.
Non-necessary
Any cookies that may not be particularly necessary for the website to function and is used specifically to collect user personal data via analytics, ads, other embedded contents are termed as non-necessary cookies. It is mandatory to procure user consent prior to running these cookies on your website.
SAVE & ACCEPT